What is a Noxious Weed?

A weed is designated noxious when it is considered by a governmental agency to be injurious to public health, agriculture, recreation, wildlife, or property. Some general characteristics of noxious weeds are the ability to spread rapidly, reproduce in high numbers, and crowd out native plants. Noxious weeds also tend to be very difficult to control.

Noxious weeds can be annuals, completing their life cycle in one growing season, or perennials, having a life cycle spanning more than one growing season. Most of the noxious weeds that we have here in Orange County originally came from other countries. Many arrived in shipments of desirable seeds, in the ballast of sailing ships, or were intentionally introduced as garden plants. Noxious weeds thrive in disturbed areas like roadsides, building sites, maintenance areas, irrigation ditches, dirt parking areas, trails, and campgrounds. Once noxious weeds gain a foothold, they can increase water and wind erosion, alter nutrient cycling, destroy wildlife habitat, reduce the usefulness of recreation areas, and decrease agricultural productivity.

Please be aware that the chief danger remains in the annual grasses that appear each spring. These grasses, most commonly wild oats and mustard, quickly begin to die back as weather heats up and become a significant fire hazard. 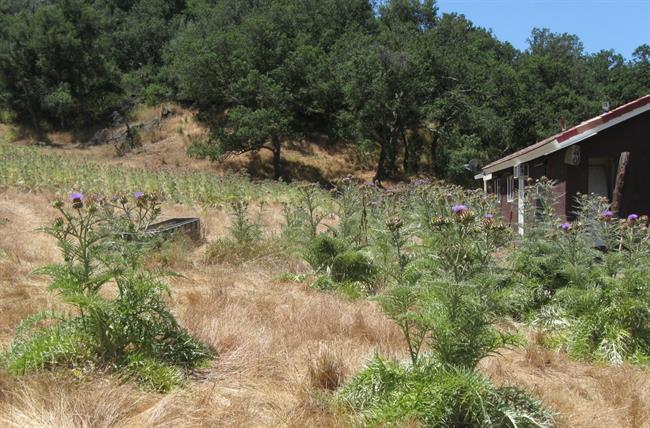 Artichoke thistle is a state listed, aggressive noxious weed that infests much of Orange County. It has caused widespread damage to native plant communities and ecosystems and has rendered pockets of rangeland useless. It should be removed whenever possible to prevent further infestations. The plant stands 1-2 m in height and can be identified by large spiny leaves that form a rosette pattern. It displays large flowering heads with showy purple disk flowers. This extremely invasive perennial is commonly found on grasslands and hillsides. In late summer, it dies back and becomes a fire danger. 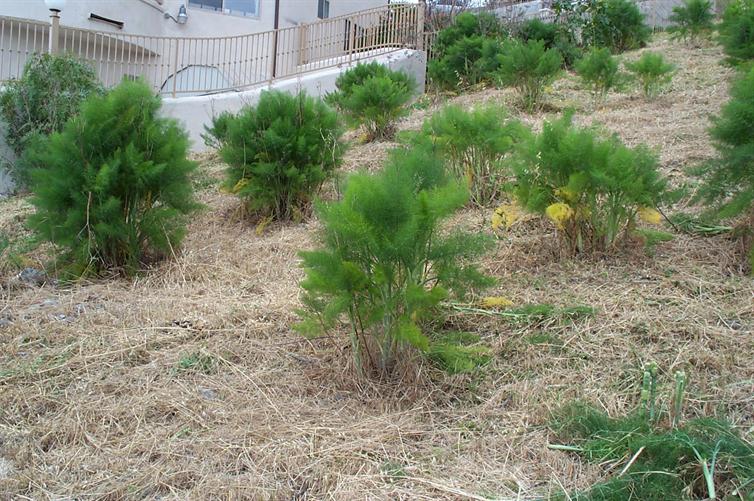 This wispy perennial is similar to the domesticated herb found in gardens. Wild fennel has a licorice-like smell. It can grow up to 8 feet high. In late summer, it dries out and becomes a fire danger. 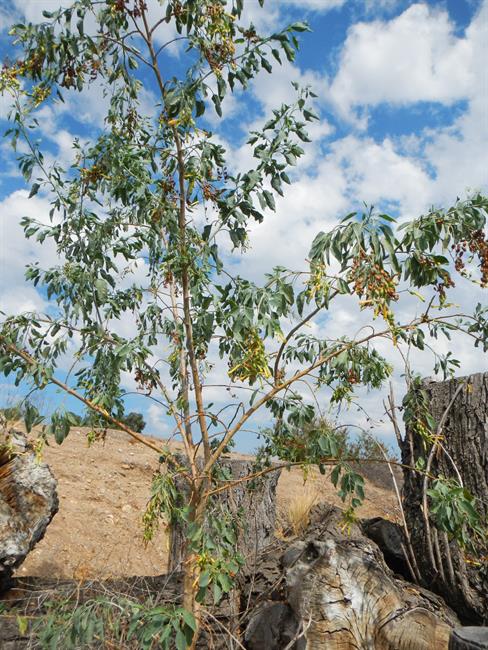 Found in disturbed areas, this highly invasive perennial weed is quite toxic. It is usually spindly in appearance with bright yellow elongated flowers. If not removed when it is young, this weed will grow into a tree. 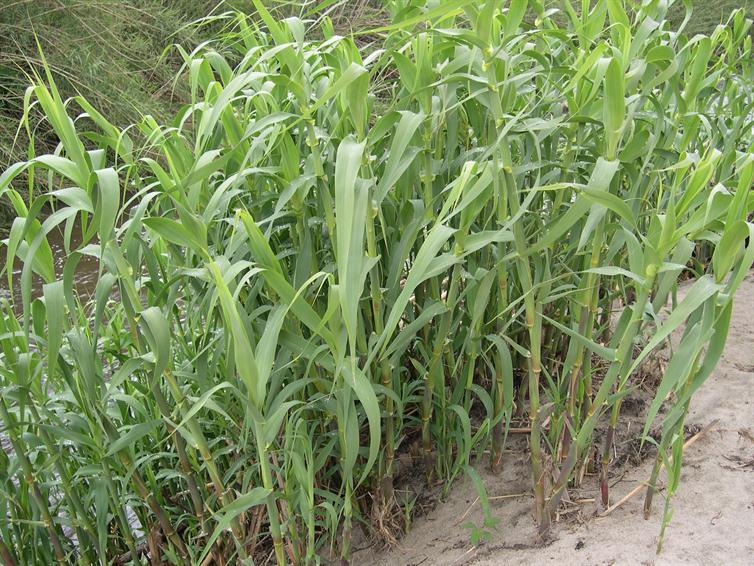 This grass is one of the most invasive wildland pest plants known to California. It can grow more than 3 inches per day and can grow to over 20 feet tall. It is commonly found in riparian (creek) areas. 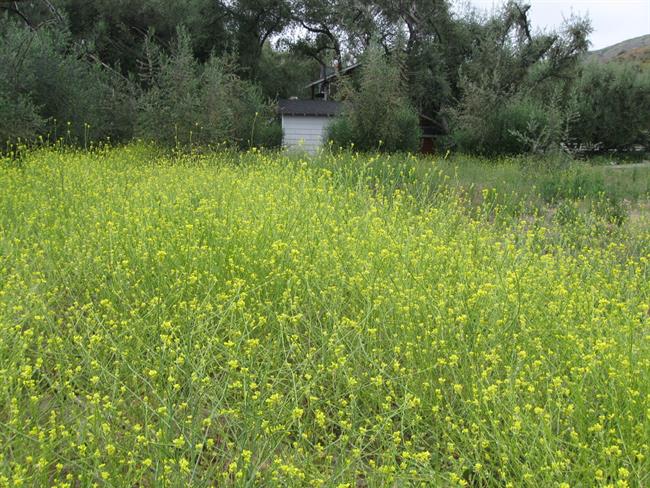 Mustard is an annual weed that is found on almost every undisturbed hillside and vacant lot in Orange County. It is easily identifiable by its many small bright yellow flowers. Once it has taken over a large area, it provides a beautiful carpet of yellow. However, as summer approaches, mustard plants quickly dry out and become a significant fire danger. 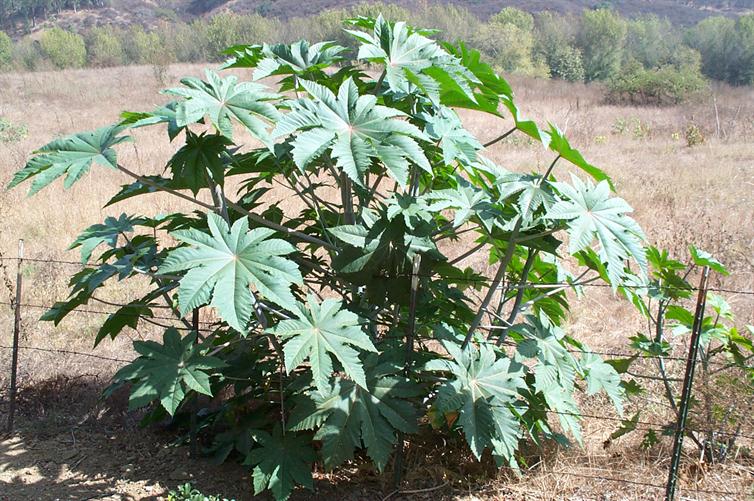 Native to East Africa, the castor bean plant has become naturalized to all of Southern California. It is very common along creeks, riverbeds, and just about any area with sufficient moisture to sustain its vigorous growth. It is easily identifiable by its large seeds. The plant is usually bunched with seeds about the size of a nickel. The plant will typically grow from 10 to 15 feet in height. Keep in mind that the seeds and beans are extremely poisonous! Keep children and pets away. 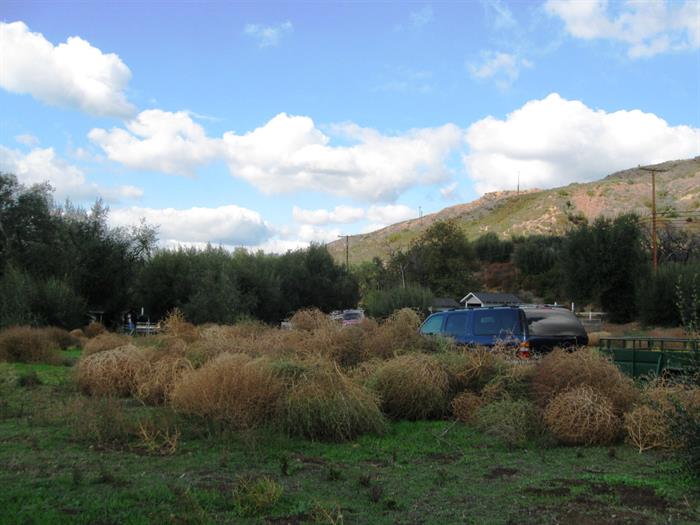 A rounded, bushy annual, it stands from ½ to 3 feet tall. It became common throughout the western United States in the late 19th century. It is mostly found on undisturbed and vacant lots. 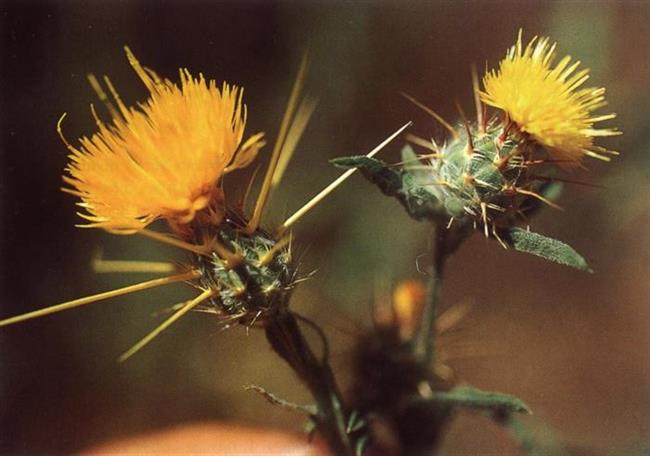 The Yellow Star-thistle's flowers (left) are generally displayed June-September.  It is native to southern Europe and western Eurasia and was first collected in Oakland, California in 1869.  It was most likely introduced after 1848 as a contaminant of alfalfa seed.  Seed is transported in large amounts by road maintenance equipment and on the undercarriage of vehicles.  It can also be spread by getting stuck in the coat of grazing animals.  Yellow Star-thistle interferes with grazing and lowers yield and forage quality of rangelands, thus increasing the cost of managing livestock.

CAUTION: Long-term ingestion can cause a neurological disorder in horses (known as chewing disease).  Tocalote (right) is a similar invasive species which is slowly spreading across Orange County.  As you can see, the tocalote has shorter spines than the Yellow Star-thistle. 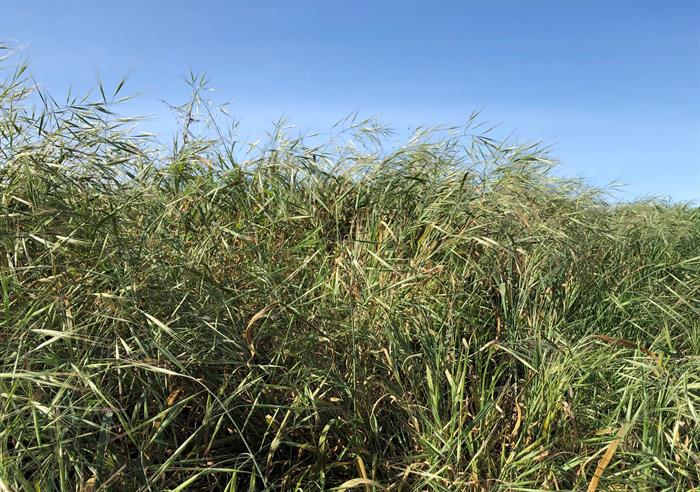 The bromus species are common grasses that emerge in spring. They can be found almost everywhere up to 10,000 foot elevation. Bromus, like most grasses, is an annual that begins to dry out in early summer, becoming a significant fire hazard.  Some examples of different problem species are soft chess (Bromus hordeaceus), red brome (Bromus madritensis rubens), and cheat grass (Bromus tectorum). 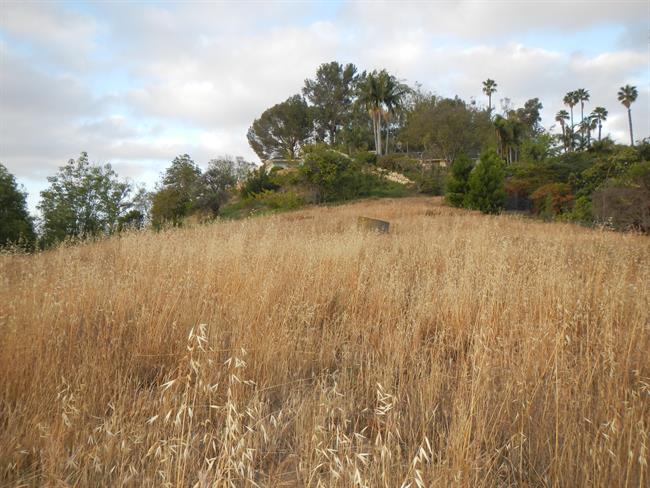 Wild oats are annual weeds that reproduce by seed. The mature plant can grow up to 4 feet tall. The leaves are similar in appearance to commercially-grown oats. 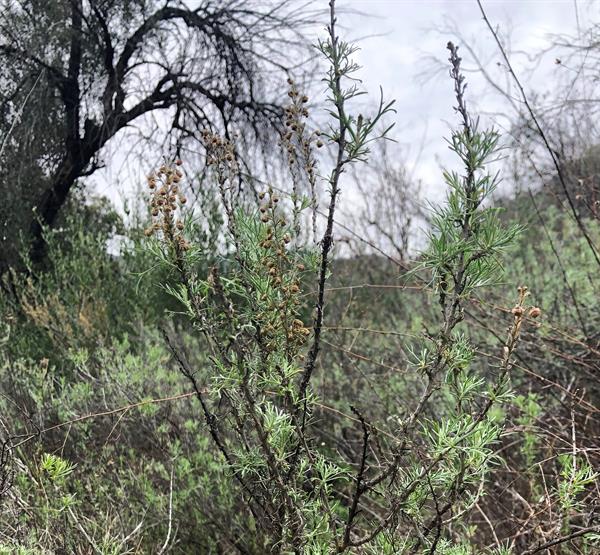 California sagebrush is a dominant plant in coastal sage and occurs usually below 2,000 feet. It is a branched shrub 2 to 5 feet tall with numerous, grayish-green leaves parted into thread-like divisions. The leaves have a clean, but bitter fragrance. 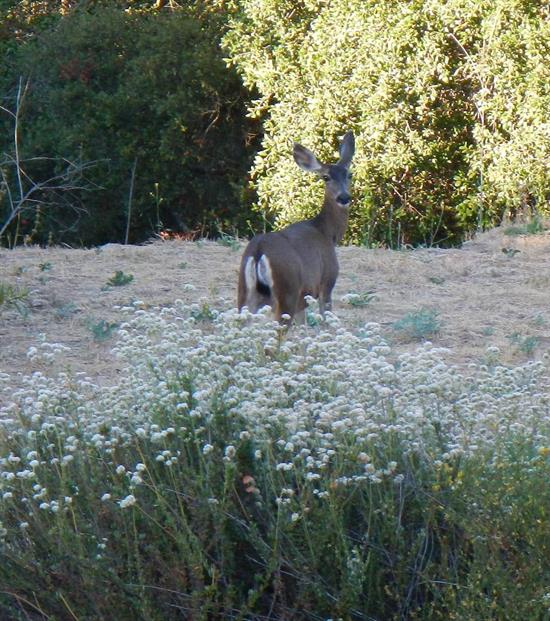 Wild buckwheat is a common native perennial that is usually 12-15 inches tall. It is found throughout Southern California in areas below 3000 ft. Its small clusters of white flowers in spring turn to reddish brown by summer. 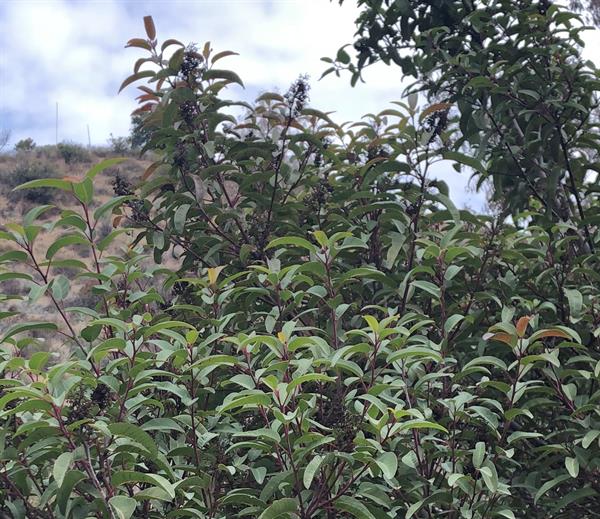 Laurel sumac is a large, rounded evergreen shrub or small tree growing 10 to 15 feet tall. Laurel sumac is commonly found on dry ridges and canyons below 3000 feet in chaparral and coastal sage scrub. Very susceptible to frost, it is often planted by citrus growers as a frost indicator. The dried out floral remains are sometimes utilized by train set builders as model trees. It blooms from June to July. 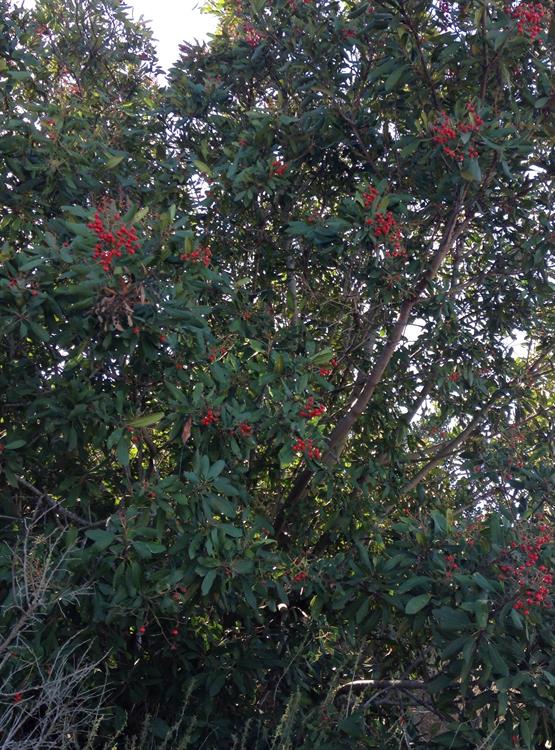 Toyon, or California Christmas berry, is an evergreen shrub or small tree growing 6 to 10 feet high and forming a round crown. The elliptical leaves are 2 to 4 inches long, dark green above and lighter underneath. By Christmas, the tree produces attractive red berries that add a cheerful note to the winter landscape and provide a feast for robins, mockingbirds and cedar waxwings. Toyon berries were gathered by many Indian tribes. The berries were roasted over open coals or boiled in a cooking basket to take away the bitter taste of the fresh fruit. Indians also made a tea from the bark to cure stomach aches. Today, this beautiful and useful shrub is planted extensively in parks and gardens.