The polyphagous Shot Hole Borer (PSHB),  Euwallacea sp., and Fusarium euwallaceae, a fungus it carries, has been discovered infesting many species of trees in Southern California. PSHB has been found to vector a symbiotic fungus, Fusarium euwallaceae, which has been identified as a species associated with tree dieback symptoms. Both the beetle and fungus are currently rated “Q” by the California Department of Food and Agriculture (CDFA). Together these pests have been found to infest a wide range of hosts, and they present a major threat to the avocado industry in California.

The fungus associated with the beetle causes defoliation and dieback of branches. This damage is due to destruction of the nutrient and water conducting systems of the tree. Injury occurs when the beetle bores into a tree to create tunnels (galleries) for its eggs and larvae and, in the process, inoculates the tunnels with its symbiotic fungi that subsequently clog the surrounding water conducting tissue, or xylem. Exit holes (0.4-1.57 in width) of the beetle along the tree trunk and branches can be identified due to darkened, stained bark, gumming, or white powdery exudates around the holes. 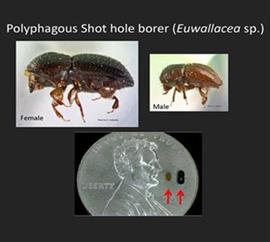 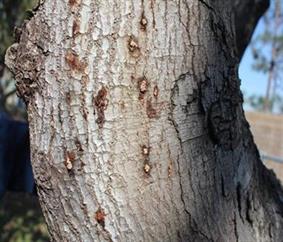 Ornamental and native foliage can fall victim to disease and insect infestation. The increase of these infected plants adds to the overall fire danger risk in Orange County, CA. Infected/infested plants should be removed after they have died.